How to tell if you’re dating down 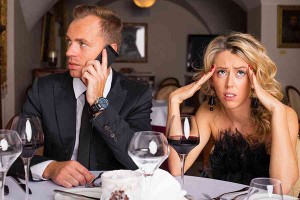 I have a large group of very fabulous girlfriends. I may be a bit biased, but I really think they’re some of the best women on the whole planet. And sometimes, I find myself being less than impressed with the men in their lives. In fact, I have one friend in particular who regularly dates down. The two of us recently spoke very frankly about this issue and I realized that she didn’t even realize that she was doing it. Once I pointed out some chronic dating issues, she really opened her eyes and is now on the hunt for a man who is just as amazing as she is. I know she’s going to find him. That conversation got me thinking, though. It might be helpful to share some info on how to tell if you’re dating down. So, here we go.

And I don’t mean that one of your friends isn’t crazy about your boyfriend. I mean that all of your friends don’t dig him and are vocal about it. That’s such a clear indication that he’s not good enough for you! Good friends want you to be happy and for a group of friends to tell you they don’t like this man means that they don’t think he’s capable of making you happy. So, listen to them and try to figure out in their concerns have any validity. My guess is that they do.

You don’t want to introduce him to your family

The family intro is a big step. It’s a step you should be happy about taking and not stressed about. If you know that your family isn’t going to like your man, that could be a tell that he’s not quite at your level. Maybe he’s not as funny or smart as you and you know that your brother won’t hesitate to point that out. That’s not a good feeling. Think about why you’re anticipating an icky meet the family moment and that should tell you a lot about this dude being on your level.

You feel good compared to him

You should feel good because of your man, not compared to him. Your fellow should make you feel like the most special woman on the planet because he’s fantastic himself. You shouldn’t feel like a better person compared to him. Do you see the difference? Feeling accomplished because your man highlights all of the wonderful things you’ve done in your life is good. Feeling accomplished because you’ve achieved a lot more than your man ever could means that he’s a dud.

You can’t picture a brighter future

Sorry, sister. But, if you’re wondering if your guy isn’t worthy, then he’s probably not. You wouldn’t have any doubts with a man who’s worthwhile. Trust me. So, ditch this dude and focus your energy of finding someone who is as special as you are. He’s out there. I know it.

Every woman deserves to find a man who is as fantastic as she is. Don’t settle for anything less, lady. You’re worth it!