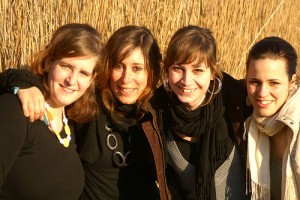 Are you watching The Real Housewives of New York? It’s super early in the season and I’m already obsessed! They’re such a great group of women in person and make for amazing drama on screen. Love them all! What I think is so interesting is how many of the women are single this year and how much they’re bonding over it. Even people who have formerly been at each other’s throats, like Luann and Ramona, seem to have made peace and connected due to their single status. It got me thinking about why it’s so important for single women to have single friends. Here’s why.

Relatable
Here’s the truth, as much as you love your married friends, they’re not going to get exactly what you’re going through as a single woman. Even if your friend has just been married for two years, she’s totally out of the loop on Tindr! There’s just a point where being single and being in a relationship make you different people. You can relate on a lot of the same things you used to relate on, but relationships might not be one of them. That’s fine! You just need to find a single gal you can chat with.

Someone to do stuff with
People in relationships want to do stuff with each other. That’s only natural! It’s what being a relationship means! But, time is a finite commodity. And if your friend is hanging with her new man a lot, it means she has less time for you. Also, it probably means that she wants to do different things than you do. A taken woman isn’t going to be as wild at a club or as aggressive meeting men. You need a single gal to be your partner in crime!

Honesty
You can be honest with your single friends about the bummers of being single. There’s a lot of great stuff that comes with being single like freedom and possibility, but there are also downers. And sometimes it’s difficult to be honest with someone who isn’t in your same boat. It’s tough to complain about not having a man to settle down with to a friend who’s dealing with marital issues, for example. There are some things you can only blab about with another single gal.

I’m not saying drop your relationship friends…of freaking course not. I’m just saying keep your eyes open for friends in your same life stage. Even if you’ve never been close with them before, having someone you can relate to can make a big difference in your life!