Why Men Pull Away And How To Pull Them Back 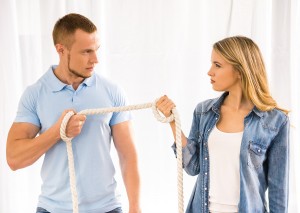 So you’re dating a guy.

On paper things seem to be going fine. Everything is great. You’re meeting, you’re talking, you’re hanging, you’re enjoying his company. The attraction is building inside you.

You’re starting to like him. Alright, maybe you’re getting a little nervous. Maybe you have one or two freak out moments.

Maybe you tell him something one afternoon when you’re hanging out. You feel close to him and you feel attracted to him and you’d like to kiss him and then all of a sudden you look at him and say I don’t know what I want right now.

It comes out of left field and the guy just sits there and shakes his head like a bobble head doll because he doesn’t know what the fuck to say. He’s seen women like you freak out over and over again, so he just deals with it.

The next day you’re calling him and texting him and you want to see him again and he’s like — great, she just had a moment.

What do you when he has his moments? His moments are more subliminal. Your moments are these occasional freak outs.

You’ll sleep with him and you’ll have that freak out moment because you enjoyed it so much but you’re not quite sure if he felt the same way. So you look at him and say maybe we slept together too early. And he has to say – don’t worry about it, we didn’t.

It’s absolutely amazing and beautiful and it makes you feel great. So then you bring out the vixen and you’re having great sex with the guy and you’re starting to breathe into the relationship.

Then something happens one day. He doesn’t text you all day long and you think… hmm, this is out of character

You don’t hear from him. Now it’s 8.00pm and the neurotic you comes kicking right back and you’re like I haven’t heard from him all day long.

So you call your friend and you say listen, I have no idea what’s going on. I know he said he had a meeting today, but usually he calls me after a meeting or texts me. I knew I shouldn’t have slept with him. And then you start going through this whole thing.

What happened is that he had his freak out moment. He’s not going to sit there in a car or sit there at a rest stop with you and say, well gee, I don’t know if I can really date you right now.

Here’s what’s going through his brain.

It’s called the process of elimination.

Usually men meet women when they’re on a high. The reason you met him and you find him so dynamic is because he’s probably got his testosterone levels up and his hormones are kicking in.

He’s super sexy right now and he’s connecting with lots of women. They all desire him and you just smell it. It’s primal and unreal and he connects with you and he’s on a roll.

Even if he hasn’t been sleeping with all of them, he’s still got to quit. He thinks to himself, is this the best I can do?

That’s how men think. They think I’ve been on this streak, there’s got to be somebody else who’s going to wow me.

So he gives in. He knows you’re the best but the process of elimination is freaking him the fuck out, and he can’t tell you because he’ll look like a total asshole.

He can’t say… you know, I was having this really big hot streak when I met you. I was meeting lots of women and I had like 10 phone numbers and I was texting all these women and then you came along.

He can’t say, I met you during one of the hottest streaks I’ve ever had. You know, he feels like Tom Brady on the field, like he’s going for another Super Bowl. Then you came along. He was about to go score Tom Brady’s wife.

That’s what he feels like. He’s into you, trust me. He does like you. He definitely likes you. There’s no bullshit. The sex was really fantastic. It kind of blew him away. The connection you’re having is really blowing him away. He’s got feelings for you. They’re real.

But he’s about to freak the fuck out.

He’s not like you. You just say a sentence, you share your freak out in the moment, and he looks at you and doesn’t say a word. His freak out is a little more painful for you. Yours are just words that you emote, and then you calm yourself down. By the time you get home, or maybe the next morning, you’re fine.

He gets triggered by a friend. His friend will say, you know, you’re on a hot streak.

He’ll think to himself, man, you’re right, this is the biggest hot streak I’ve ever had in my entire life. She’s pretty amazing but I am on a streak. Am I sure I want to quit right now?

Is she really as amazing as I think? I mean, Jesus, she is pretty hot. You know, we had great sex, and we really connected, and she’s like an amazing friend, and I could really see having a relationship with her.

Then this is what he does.

He just pulls the fuck back.

He goes into that cave and shuts the door. He will be home one day. He won’t text you. He’ll just stare at the walls all day long. You think he’s busy, but he’s not busy.

He’s just freaking the fuck out.

You’re texts come in. He sees them and thinks to himself, I can’t respond to that right now. I can’t give into that. I don’t know what to do, and I can’t explain to her why I’m pulling back, because I don’t really want to pull back. I’m really enjoying being vulnerable with her. And if I explain it to her, I’m going to look like an asshole.

So the next time you’re dating a guy, and he goes into a cave, allow him to go into the cave. Forty-eight hours is usually what it takes.

If he disappears for longer than 48 hours, he’s an asshole.

All you need to do is send him one little text that will bring him back out of the cave.

You need to send him this one simple text. This text will bring him out of the cave:

Just thinking about you. Hope everything is great for you today.

That’s all you need to do. And just wait. Let him text you back. He’ll call you. He’ll come out of that cave. This may be the first time he goes into the cave but it won’t be the only time.

He will do it on many occasions moving forward in the relationship.

This is the first of many trips into the cave, and all you need to say is I understand.

Telling him you’re thinking about him triggers that caveman inside him. It makes him want to come out of the cave and reclaim you.

That’s all it is.

Enjoy the men’s side of neurosis.