How to Deal With Your Ex 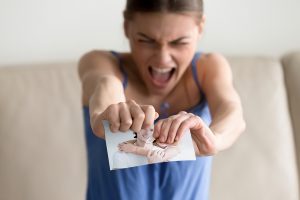 In coaching, I hear this on a regular basis: “I hate my ex.”

“I can’t believe I had children with this man or woman.”

“I can’t believe I have to deal with them for the next X amount of years.”

I hear this absolutely non-stop. Let me tell you, it’s not that I don’t understand it at all.

It’s almost like a cruel gift that keeps giving.

For those of you that do not share children with anybody, I would want you to read the rest of this article so you can be well-warned.

You see, when a regular relationship breaks up, man and woman make a decision to end the relationship. If they don’t share children, they really don’t share any permanent connection with one another. As a matter of fact, the breakup is fairly clean on many different levels.

You go one direction, they go another, maybe you run into each other and exchange pleasantries. Maybe you go on to be friends.

But you no longer have to deal with that person.

It’s a whole other ball game when you share children with somebody.

You’ve got to consistently deal with them.

And it takes a lot out of somebody.

You see, when you’re constantly dealing with somebody you no longer want to deal with, you’ve got to bite your tongue.

At all. There’s a reason why you’re not together anymore.

And you are reminded of it on a daily basis.

When you need to deal with somebody over kids, you’re going to be reminded of why you guys are no longer together many times over the course of your lifetime, how you can never seem to get to a resolution.

How you never truly understand one another.

How you truly don’t listen to one another and the list can go on and on and on.

What Does A Man Or Woman Do In This Situation?

Well, the first thing you have to do is be bigger than anything.

You’ve got to try to put your personal stuff aside and do what’s best for the sake of the children.

What’s best for the sake of the kids?
Well, according to just about any therapist, family court judge, and anybody who knows anything about parenting, it’s that both of you have beautiful, amazing, loving relationships with your children.

Both of you support fully the time that each of you have with the children.

Both of you make sure the children know they’re safe in both homes.

Both of you never use the children as manipulation tools and try to alienate one parent over the other.

But that might be asking too much from some people, because a lot of people are just not evolved at all. They use kids as weapons.

People are just not that evolved take their anger and frustration out and they don’t let go of what happened to them in the past.

You’re no longer with this person because one or both of you made a decision to no longer be with the other person. Get over it.

As a matter of fact, get over it as fast as you can because any damage you’re doing right now to the children because you’re still pissed at the ex is going to greatly reduce the chances of you having a good relationship with your children in the future.

The kids always see the truth about their parents as they get older.

Once again, get over it.

So what if they left you with three kids?

If they left you, you deserve to be left.

Stop being a victim in your story. Stop making that person a villain. The relationship failed or did not work because both of you were not able to make it work, so stop becoming the victim in your victim story and stop holding the vendetta against that person.
When you truly do not like your ex, the only reason why you don’t is because you are allowing your ego to get the better of you. You’re not doing things for the kids.

I’m not going to tell you my feelings about my ex at all. To be honest with you, I truly support my daughter’s relationship with her mother. And I’ll leave the rest of the way I feel out for the sake of taking the higher road in life.

Because that’s how I choose to do things.

Don’t forget, if you were the one that was left, you were left for a reason.

You were left because the relationship was no longer working for that person.

That person couldn’t stand to be around you and was actually doing you a favor by leaving.

Thank them for no longer wanting to be with you. Because you’re free now. Free now to find the love that you deserve, the love you desire, free to find the type of man or woman that you want to be with.

Don’t hold a vendetta against them. Because any vendetta you hold against them will greatly affect the children.

I’m not telling you to love them, but just do what’s right and be fair to each other.