Three Ways To Deal With An Annoying Ex 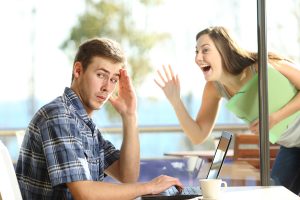 How many of you have an ex that drives you nuts?

The beauty of an ex, when you don’t have children, is that you can walk away clean. For those of you who are dealing with exes and you don’t share kids, you’re out of your mind. You don’t have to deal with them anymore. I am about to reveal to you three ways to deal with an ex.

The greatest thing about breaking up with somebody – once the relationship is over and once you’ve learned everything you needed to learn – is that you don’t have to talk to that person again.

Granted, it was somebody you were once in love with. But, being in love with somebody once doesn’t mean you have to take their shit forever.

Which leads us to number one.

1. You were once in love with them

Yes, you were best friends during the course of the relationship, but since the relationship turned sour, you’re not really friends with that person anymore. You’ve learned all the lessons you could learn and, unless you’re sharing a business with them or own a house together, you have no reason to stick around. Why the hell are you dealing with your ex unless you’re a glutton for punishment?

The beauty of not having a child with somebody is that you can leave the relationship freely, and you can leave it embracing every single lesson that came your way. As a matter of fact, you can do the “Ex Dance.”

It’s a dance where you can just shake your head, and shake your body, and go yes, I’m free, I don’t have to deal with this person anymore. Thank you for allowing this person to come in my life.

Thank you for the lessons that this person brought me.

And, thank you for me never having to deal with them again.

Which leads us to number two.

If you’re sharing a child, or two children, or three children with somebody, that’s the gift that keeps on giving. Until you realize why you ex-partner is still triggering you, you’re still going to get angry and have what people call marital fights.

Exes will trigger you non-stop until you realize, and tell yourself, that you won’t be triggered by them again.

When you share a child with somebody, they know how to push all your buttons.

They’re going to continue to play it out the same way until you decide to get smart. The ex is the gift that keeps on giving over and over again until you finally decide to wake up and say, “No more.”

Which leads us to how you do that.

Your ex sends a text.

Then, your ex is a micro manager.

Maybe your ex is an over-protective mother or father and tries to tell you everything to do with your child.

I strongly suggest you do one of the greatest things in the entire world that will drive them nuts and put all the power back in your court.

I know it may not sound like the most mature move, but who needs mature when you’re dealing with somebody who loves to battle, who loves to consistently poke at you?

What do you do when the bully tries to bully you? When you were younger, what did your parents teach you to do? You just ignore the bully.

You don’t fight back. You don’t get into a battle of words. You’re never going to win.

You know what your ex is all about. If you’ve got one of those combative exes, you know exactly what they’re all about. They just want to keep pushing the buttons, they want control. They’re very fearful, so they want to continue to control you and probably control the kids as well.

So you do what your mom taught you as a kid. When the bully comes and throws words at you, those words are nothing.

Remember “Sticks and stones will break my bones, but words will never hurt me”? You put them on ignore. They send you a text, ignore it. Don’t engage; don’t answer; don’t defend yourself.

Just don’t answer it. Ignore it.

Eventually they’ll get the hint that their shit is no longer working.

That’s the sound advice that I give people because when you’re with an ex and they are driving you nuts, the worst thing to do is to continue to battle. It’s a battle you’re never going to win; I mean, think about it, you never won that battle when you were together, so why would you win the battle now?

There is no chance in hell you would win that battle, so why bother fighting a battle you’re not going to win?

Just remember, “Sticks and stones may break my bones, but words will never hurt me.”

Ignore them, that’s the best advice I can give you. It’s advice that I take myself.

Because there’s nothing else you can do. If you get into a conversation with them and try to prove your point that you’re right, well, it’s never going to work. The relationship didn’t work for those reasons, so why bother? Ignore them. They’ll get the point eventually.