Why Dating A Married Man Is Romance Ghetto 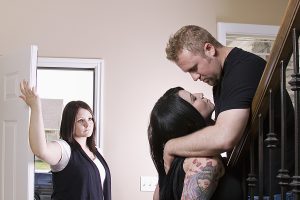 How many of you have dated married men?

I hear this all the time. “I’ve waited four years for him to leave his wife.”

“I know he’s going to leave his wife soon, he promises.”

Some men even put up their lover in an apartment so they can have it when they want.

But listen. You are never, ever, allowed to date a married man ever again. And I want to tell you why.

First off, you are going into a triangle. A triangle of doom.

They say, “I’ve been married, I got divorced. And my kid was a priority after that.”

So think about a married man.

He’s got years in the relationship.

He’s got money, houses, possessions that need to be split.

He doesn’t know what to say to the kids.

You just get to the point in your life when you realize you don’t want to work as much as you used to work. And by realizing that, you realize that if you are going to split the pot, it starts to get really ugly.

Divorce is ugly. The second a man leaves his wife and she finds out – because she will – that he’s having an affair, she’s going to hang, hang him out to dry.

He’s going to lose so much more than money and his kids.

You see, you never date a married man. It’s a dead end street no matter what. I can go on and on about the reasons why. He is not going to leave his wife. 95% of the time they never leave their wife. Why? Because, as I said before, it’s so much cheaper to stay in the marriage.

It’s easier. They don’t want to be without their kids. You’re convenient. The whole affair has been set up with convenience. He’s getting what he doesn’t get at home. He’s getting the sex from you, and the emotional connection, but he’s still getting something from his wife. So basically, he’s combining the two of you together to formulate the perfect person.

She’s the mother of his kids. And you are the lover of his dreams. So why does he need to rock the boat? He already has all that he wants.

You, your clock is ticking. You want a child. You see what type of father he is (that’s if you are in that stage of your life) and you see him as husband material.

But don’t ever date a married man. Have I gotten through to you? I can go on and on and on because this is so important to realize.

Date a divorced man. Date a man that moved out. Date a separated man. There are so many great men out there. You don’t need to be dating a married one.

I’m going to leave you with one final thing to think about. Most of you who date married me are dating married men because you have emotional blocks. It’s safer for you date a married man.

You see, you can have a pretend romance and you can think that in the future you’re going to be together, but in reality it kind of takes the pressure off of you, because in reality you’re basically a mirror for him. He’s never going to leave his wife because he’s got the best of both worlds.

You haven’t worked on the things you need to work on, like how to get intimate with a man, how to be seen, how to show up, and how to really communicate. With anybody who’s a great communicator and really stands to love, they’re not going to waste their time with a married man.