Please Be The Person In Your Photo

I was having a conversation with a good friend of mine the other day.

He’s meeting a woman who lives in Orange County. For those of you who don’t know Los Angeles, Orange County is the next county over from LA.

Los Angeles to Orange County is about 42 minutes on a good day. It takes 17 hours on a bad day.

He met somebody on Tinder. 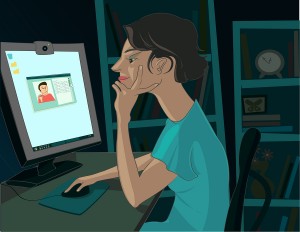 The pictures that she shows on Tinder have attracted him enough to want to meet.

They’re consistently good pictures, but we all know that they could be consistent pictures from 10 years ago.

A man’s biggest fear when he meets a woman for the first time is that she’s not going to look like her picture.

I know that might make you cringe, and feel that men are superficial, but in reality we just want you to look like your photo. We don’t want to waste time with photo-swappers.

You know who you are.

You swapped out your photos with ones showing how you used to look, hoping you can just show up and we’ll be attracted to you because of your ravishing personality and beautiful warmth.

But, let’s call a spade a spade.

We want the girl in the picture to show up.

We made a determination no matter what you said in your online profile, whether it was from Tinder or Match.com or OKCupid, or eHarmony, that we want to meet you.

We want the girl in the picture to show up.

The way a man’s mind works is this, we have been looking at pictures of women our entire life. We looked at Playboys, Victoria’s Secret models, women on the Internet.

The great thing now about dating through apps and online is that we can actually meet the girl in the picture.

We’ve never been able to meet the girl in the picture before even though we have had fantasies about being with a Victoria’s Secret model.

So, you become the girl in the picture that we’ve always fantasized about.

After all these years, our real life Victoria’s Secret model is going to come and meet us for a drink.

When we show up at the bar at 8:00 o’clock, we’re expecting the girl in the picture, and you show up 10 years older, 30 pounds heavier.

The little boy inside the grown man is disappointed. This is not the girl in the picture. What are we going to do?

It’s not superficial. It’s the way things are, and you need to understand that.

Whoever you are right now in this present moment, you need to embrace that. Whether you’re 30 pounds heavier, 10 years older, be that woman right now. For every woman, there are men that will be attracted to her.

I have a friend who looks at the women I’m attracted to and thinks they’re twigs and he doesn’t like their bodies. He likes them round and plump and curvy and big-breasted. He likes a full-bodied woman.

I don’t do well with tall women. It’s never been my thing. A friend of mine is 5’9″ and loves tall women.

Be who you are and realize there’s a huge market for exactly what you are. Be authentic. Be real. Put the right pictures up.

A friend of mine went out the other night with a woman. She’s 37. He’s 55. He was like, “I’ll go out the once, but I really want someone a little more age-appropriate.”

They ended up hitting it off and after about three hours of talking, she said “I don’t understand, they’re showing me as 37 on the site, but I’m actually 45, about to be 46. I don’t know how to change it.”

He looked at her and said, “you just became so much more attractive to me.” And they’re dating now.

Be real. Be authentic. Be your age. Be your size.

Be the person in your photo.