How to deal with dating rejection 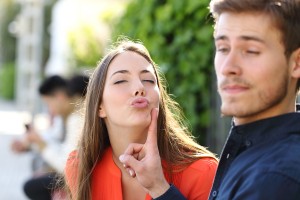 One of my very good friends just ended a long marriage. While the end of a marriage is of course sad, this was a long time coming and the best thing for both of them. The divorce is recent, but the love ended a while ago. Emotionally, my friend is very ready to move on from her old relationship. But, she refuses to date because she’s petrified of being rejected. As someone who’s been on and off the dating market a ton, rejection isn’t that big of a deal to me. I guess I’m used to it and hearing her fear of rejection made me realize that this could be a big issue for many people, both new to dating or even old hands at the datingsphere. So, I thought I’d help you out with some tips.

Rejection is going to happen

My friend keeps asking me, “Do you think I’ll get rejected?” And my answer is no. I don’t think you’ll get rejected. I know you will. Rejection is part of dating. And it’s not a good part of it. It’s embarrassing and painful, sure. But, it’s part of it. So, stop wondering “if” and just accept that it’s a question of “when.” Attempting to avoid it is futile and embracing it will make it easier when it happens.

Rejection means something about the state of your dating life. But, probably not what you think. Rejection doesn’t mean that you’re a bad person, undate-able or unloveable. It doesn’t mean that you’re destined to be alone forever or need to lower your standards. What it means is that you’re trying. You’re trying to find love and rejection is a bump in the path you have to cross to get to your destination. Reframe rejection to be less about how crummy you are or even how crummy dating is and think of it as a sign that you’re doing really well at putting yourself out there and putting the effort in. So, rejection is kinda a good thing! Even if you can’t get to the level where you celebrate rejection, try to get to a point where you don’t interpret it as a negative reflection on you or your future. It can feel crappy in the moment, sure, but that doesn’t mean you’re crappy or your hope at finding love is crappy.

Well, let me rephrase that. Rejection might not get easier. You get stronger and more sure of yourself. You get better at dealing with it, so it seems a whole lot easier. It’s fair to be nervous or afraid of your first rejection in a while. Just know that it’s not always going to be that bad. The second time you get rejected will feel a little less harsh and take a little less time to bounce back from. And it’ll just keep getting less and less as you get more and more dating experience. So, buckle up for a rocky ride at first. But, before you know it, dating will be smooth sailing.

I’m hoping that I can convince my newly single friend to start dating despite the impending rejection with these three points. Hopefully, I convinced you, too.