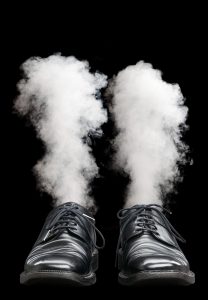 When I’m in the very beginning stages of dating someone, I’m nervous. And sometimes it’s cute, fun nerves that come from young love. But, often the nerves stem from not being certain where the relationship stands and worrying about if he’s going to hurt my feelings. I know, not my typical schmoopy boopy take on love, but these feelings are just as true for me as my enthusiasm for love. What I worry about the most, and what I hear my friends worry about a lot, is getting ghosted. Ghost is the idea of someone you’re starting to fall for vanishing is tough to swallow. If you think you’re about to or actually are getting ghosted, here’s what to do.

Talk to a friend

While I’m a big believer in trusting your gut, I know that I personally lose touch with reality in the first few months of a relationship. I’m on cloud nine at first and anything a notch below that feels really terrible in comparison, but the truth is that reality is just catching up with me. So, what may seem like a relationship disaster is actually a totally normal relationship happening. If you think you’re being ghosted, check in with a good friend with a lot of dating experience before you freak out. They may be able to put things into perspective for you. There have been several occasions when my girlfriends did this for me and I couldn’t be more grateful to those goddesses.

I do not go gentle into that good night which probably isn’t surprising. I don’t go gentle into much. But, I don’t think anyone should turn the other cheek when they’re being ghosted. Ghosting is such a crappy thing to do to someone and the ghoster should be held responsible for that. I recommend asking the person ghosting you to explain themselves. A quick “Hey, what’s up” text or “I’m getting a weird feeling that this may be over. Would you mind chatting about it quickly?” is the right message to send. Don’t let him be a ghost. It’s very reasonable to ask for an explanation. Of course, depending on how mature or compassionate this person is, you may not get it. But, it’s worth asking.

This ghoster is not worthy of you. I personally think a ghoster isn’t worthy of anyone. It’s such base, thoughtless behavior. A ghoster has a lot of growing up to do before they turn into relationship material. You’re going to find someone a whole lot more deserving of your wonderfulness. So, keep holding out for the right one. They’re just around the corner…and would never ghost you!

Getting ghosted is such a crummy feelings. I’ve been there and I want to help any fellow ghostees deal with it. Hopefully, this does!