What to do if your big mouth upsets your boo 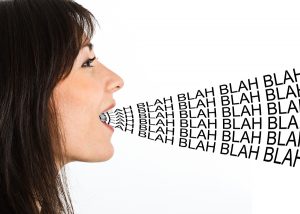 Portrait of a woman talking too much I’ve written a lot about how to deal with your man if he upsets you, but I actually haven’t written a ton about how to handle a situation when you do something wrong to your man. Believe me, it’s not because I’ve never made a mistake in a relationship. I have. A ton! But, I’ve learned from them. So, I thought maybe you’d like to learn from my mistakes, too. One thing I find myself in the doghouse for a lot is having a big mouth. I’m a private person about some things, but obviously not about others. I had a reality show for crying out loud! But, I’ve dated many men who aren’t comfortable with my level of disclosure to my friends and even the public. And I’ve had to figure it out the hard way. Here’s how I’ve bounced back from those situations.

When your man brings up a secret you let out and how it bugged him, your job is to hear him. Just listen. Don’t defend yourself or explain why you did it. Listen and validate his annoyance and pain. Even if you didn’t know it would hurt his feelings and didn’t plan to impact him this way, you did. And you need to own it. Don’t let him feel small for bringing it up. Make him feel recognized.

Then you have to say my least favorite phrase in the English language, “I’m sorry.” It doesn’t matter if it was a mistake or you don’t think it was that bad, you hurt him and you should be sorry about that. So, say it. It’ll make him feel a lot better to hear it.

If you’re anything like me, you will unintentionally slip up. It just happens to people with big mouths. They’re open and stuff comes out of them! Instead of keeping it a secret from your man and hoping he never finds out, I think you should tell him right away. Be apologetic and be clear that it was a mistake. He’ll appreciate the honesty and it’s a lot better that he finds out from you than he finds out from someone else. He might lose trust in you if he finds out from other sources. And trust is so crucial!

Hope that helped my big mouthed readers! Just know that I’ve been there with you!