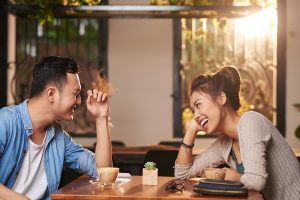 First dates are a flurry of nerves, excitement and, let’s be honest, judgement. You may be so busy nitpicking him apart that you fail to notice some really good things about him. And while red flags are important, you should take note of his green flags, too. Here are few that you may not be looking out for, but totally should be.

First dates often involve alcohol and that’s fine. I’m very pro drinking up to two drinks on a date. More than that and things get sloppy and not sexy at all. If your date stops drinking after two drinks, that’s a really good sign about how he handles himself. You want to wind up with a guy who’s responsible in general and in regard to his alcohol consumption. A dude who can stop after two drinks on a date is definitely indicating that he’s more responsible than not.

A guy who’s negative about his job, apartment and past relationships is obviously a dud. But, sometimes it’s hard to notice when someone’s positive. If your guy seems to like his life and look on the sunny side, give him some extra bonus points. A positive guy is so much easier to build a relationship with than a total downer.

It’s early to think how he’ll family will treat you, I know. But, once you get into a relationship, his family can make your life wonderful or miserable. If they sound nice and normal, or normal enough, mark that in the win category.

A guy who’s socially savvy enough to ask questions definitely should score keeper points. Asking about you is an indication that he’s curious about you and values your experiences. It also means that he’s not super self-involved, which is a good thing. An even, balance conversation with him asking as many questions as you ask him is such a good sign of how you two could interact long-term.

A huge pet peeve of mine is when a man orders for me or decides when to ask for the check without consulting me. Like, hey buddy! I’m a person here, too! I’m not saying he needs to ask your permission to use a napkin, but it’s a good sign if he checks in with you before asking for the bill. He’s showing that he doesn’t have to control everything and is open to your input. Small, but important things!

These signs may be teeny tiny, but they indicate big things for future boyfriend potential. So, don’t overlook them!