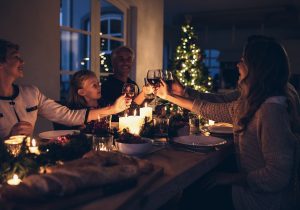 The holidays – and kinda winter in general – are packed full of family togetherness, family traditions and, of course, family drama. If you’re seriously dating or married to a man, chances are, you’re one of the newer members of his family clan. That means you’re not as steeped in his family’s traditions and probably not as into them as the rest of his family. If you’re hoping to change some element of his family’s traditions – doing Christmas with his parents, sticking to an ugly sweater-only gift exchange or going to a religious ceremony, for example – here’s how to do it without hurting anyone’s feelings. I’m not saying your winter’s going to be completely drama-free if you do it my way, but I think the drama will be minimized.

Talk to your boo

First thing’s first, you and your man have to get on the same page. Explain to him what you’re thinking and why. And be gentle. It may seem obvious to you that his uncle dressing up as Santa and making every fully-grown woman in the family sit on his lap is beyond disgusting and a completely valid reason to skip Christmas Eve with his family, but he probably doesn’t see it that way. Try not to start too negative. A good plan of attack for this convo is to start with what you do want to do over the holidays instead of what’s awful about his family’s ongoing traditions.

Be open to compromise

Just like he doesn’t know how creepy his uncle is, you could be blind to some less-than-fun stuff your family does. If you open the door by suggesting breaking his family’s traditions, then be prepared for him to get real about your family. You’ll have to give a little too in order to find the best solution for your holidays together as a couple.

Now that you two are on the same page, you need to break the bucking news to his family. Be straightforward with them… to an extent. Tell them what you are and aren’t doing with them so that you’re not leaving them hanging with plans. If they dig into the “why” of it, you can tell them the truth, but probably not all of it. Remember how I said you should focus on what you wantto do instead of what you want to avoid with your man? Do that here too. Tell them what’s great about the new tradition you’re starting instead of what’s so boring, creepy or wrong about theirs.

Here’s where the teen babysitter in me who used to bribe kids into behaving comes out. Give them something they want while you break the news that they’re not going to get to do their family traditions with you. For example, you’re not going to spend Christmas Eve at church with them, but you’d love to go to church on another Sunday. Or, you want to do Christmas morning just the two of you instead of sleeping in a twin bed at their place so you can do Christmas morning with them. That’s fine, but maybe you can get together for a late lunch after you’ve unwrapped gifts with your boo. Think of what they want from you – time, spiritual commitment, presents, a good family pic – and find a way to give it to them that doesn’t cramp your style. Or, at least doesn’t cramp your style too much.

You two need to work together to figure out your own holiday traditions. After all, you’re moving toward establishing your own family together. You have to give your future kid-in-laws something to buck!