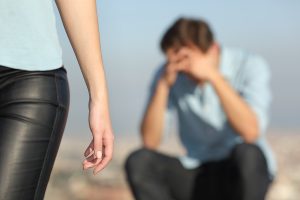 Friendships are complicated and layered. I’d say they might even be more complex than a romantic relationship. Of course, when things are going well, friendships add so much to your life. Friends understand you, support you, celebrate you and value you. Even if you’re with the most amazing romantic partner in the world, sometimes there are things only a friend can help you with. But, the end of friendships can be terrible and bitter. And I’ve been thinking about why that is. Here’s what I’ve come up with on breaking up.

There’s no level down

With romantic relationships, the break up can hinge on one thing. For example, he cheated on me or my mother hates him or he’s not Jewish. But, with friendships, a break up happens when a million small things pile up to make one big thing. There’s often no event or anything dramatic to point to, which makes it seem really sad. There’s nothing to be angry or shocked by with a friend break up. Only sadness!

Friendships are rarely just two people. There are other people in your life who are involved with that friendship. Even if it’s not a best friend trio or something as direct as that, you probably have a crew, your friend has her own relationship with your boo and you two have established traditions within groups together. It’s tough to split when it’s more than just the two of you in the relationship.

We don’t see the break up

We watch a ton of entertainment and hear lots of stories about break ups. We get them. Our society realizes break ups are part of finding love. But friend break ups aren’t as mainstream. We don’t see movies about them and people are so hurt and embarrassed by their friend break ups that we often don’t talk about them. So, no one’s prepared when they happen.

She’s not there to talk to

The worst part of ending it with a friend is that you don’t have that friend to support and love you through this tough situation. You were friends with this person for a reason. And just because you have a reason to end that friendship doesn’t mean that you’re going to miss her any less. It’s a sad hole to lose a friend and to not have her there to help you through it.

Sending my love to everyone out there who’s going through a friend break up. It’s tough and I feel for you! Mwah!