Is your dude always late? Ditch him! Here’s why. 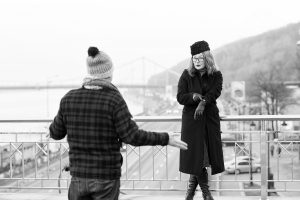 This past weekend, I was getting drinks with my girlfriend and her new guy. It was the first time I was meeting this guy and he showed up 45 minutes late to meet us. While we were waiting, she said that this wasn’t a big deal at all. He’s always late. When he finally showed up, he was nice enough. But, I texted her immediately after leaving drinks and told her that she had to dump him now. She was shocked at my reaction and the next day, we actually had a long phone call about it. Here’s what I told her.

He doesn’t respect you

A guy who’s chronically late doesn’t respect your time, obviously. He also doesn’t respect you. He’s telling you that promises he makes to you – like being somewhere at a specific time – don’t matter to him and you’re not valuable enough for him to prioritize. Everything else in his life is more important that you. That’s not where you want to be on his priorities list! You want to be on the top of it. Granted, everyone runs late at some point. But, a guy that cares about you will get in touch and let you know because he doesn’t want you waiting around for him. My friend’s guy clearly didn’t respect her – or me! – and that’s a no-go in my book.

You have to be the forgiver

When my friend’s dude showed up, he was all apologies. She had to tell him it was alright and she forgave him like a million and a half times. If she didn’t – and instead told him that it was rude and pretty mean of him to be late all the time – she’d look like a major bitch. You don’t want someone who puts you in that situation time and time again. You partner shouldn’t be forcing you into forgiving them for something that isn’t an honest mistake or something they’re not going to learn from time and time again. It’s a crappy situation to be in and really crappy of them to put you in it. Why be with someone so crappy?

Ain’t nobody got time for that

You don’t have time to wait around. Like, at that restaurant or in your life. Girl, there are bigger and better and more punctual things waiting for you right around the corner. Every second you spend waiting around for this guy is a wasted second you could have spent finding a new dude who will actually show up. You don’t have time for this lateness. Cut it out of your life immediately.

I want to tell you that my friend dumped this dude, but she hasn’t yet. She wants to give him another chance. I’m not using psychic powers when I tell you this relationship is going to come to an ugly end soon. But, I’ll be there for my girl when she goes through it. Hopefully, you guys will ditch your late dudes more quickly than my friend. Believe me, you’ll be glad you did.