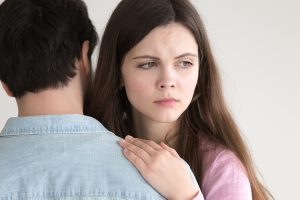 Everyday, I get emails from so many women. And by the way, I appreciate every email that has ever been sent my way. And what breaks my heart is that so many of them are in relationships that no longer serve them at all. And the reason why they’re in these relationships is because they’re afraid of being alone.

I understand what it’s like. Being alone can sometimes be very scary. But it’s actually the most empowering thing you can do.
I haven’t had a long-term relationship in almost four years. I’ve been mostly alone. But every day, I wake up, and I say a mantra to myself.
I’d rather be alone and happy than be in a relationship with somebody that makes me unhappy.

I thank the universe for allowing me to be single, to give me the opportunity to meet someone I’ve never met before. And maybe today is the day that I will have that serendipitous moment where I connect with someone who I’ve never met before, and together, we’ll take the journey into love starting from the moment we meet.

1. You don’t really love him. It’s time to admit that to yourself.
Maybe you find yourself with a man who, if you had to grade him on a scale from 1 to 10, or if you had to use the old grading system we had in school from A to F, you’d find that he’s always compromising. I hear this a lot from women.
He does so many things right, but…

I keep wanting him to understand me, but he doesn’t. He promises he’ll work on things, but he never seems to change at all.

See, it’s the changing that really shows that you’re not in love with somebody. You see, when you meet somebody that you fall in love with and you accept their stuff, you don’t expect them to change into something that you want them to be.

You see, who they are is pretty damn amazing.

We all have stuff we work on, and together, we’re able to work on that. A true love relationship is a mirror. We work on our shit together. We help each other together, and both parties are active participants.

2. You’re waiting for him to change and become something that he isn’t.

Love it or not, the old saying, what you see is what you get, really comes to fruition here. The man that you’re with, the man that you want to change, is never going to change. He’s never going to be the person you want him to be. You see, if he was able to change, he would’ve already done it. And the fact of the matter is, by you wanting to change somebody, you’re actually telling the universe you’re with the wrong person. You’re not loving him. You’ve not loving what he’s all about. You want him to be something else because you’re afraid to be alone, which leads us to number three:

3. You’re only with him because you’re afraid to be alone…

…so you keep hoping and praying that things get different, and you keep depriving yourself of love and affection and anything else you’re depriving yourself of. You don’t want to be alone because you hear horror stories, and it took you so long just to find him.
So you’re basically telling yourself that you don’t deserve love. You’d rather be in a subpar relationship, hoping that that person morphs into exactly what you want.

You see, being alone gives you the opportunity to really go find that person. It’s the switch that you need to flip inside your brain and your mind and your heart, and you need to practice abundance and realize that there’s somebody out there for you who is absolutely amazing.
I know it. I believe it. So I don’t stay in relationships where I needed to change or turn someone to something that was going to work for me.
These are the three top reasons you’re not really in love, and you’re just afraid of being alone. Let’s face the truth.