How to flirt at work without crossing any lines 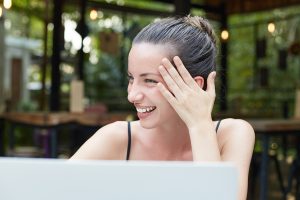 Thanks to the brave men and women who have come forward about workplace harassment, assault and rape, we’re all finally having a long overdue conversation about gender, sex, power and the workplace. It’s about freaking time. I’m beyond sensitive to these issues because my work is romance and typical workplace boundaries are both more difficult and more important to enforce in my office. And while flirting at work is on an entirely different level than many of the heinous stories we’ve been seeing in the news, these egregious and revolting stories are making people think about the micro-workplace problems that can pile up into major gender and power-based issues.

I spoke to career empowerment expert Julie Hochheiser Ilkovich about how to flirt at work while not crossing any lines. Julie and I both agreed that work is where most of us spend most of our time and it’s entirely understandable that romantic feelings develop in work environments. For some of us who work a lot, the office is literally the only place we could meet someone. That being said, romance at work is tricky, especially the beginning stages. I grilled Julie on how to flirt at work without crossing any boundaries and here’s what I learned.

Figure out what the rules for dating are in your office and follow them. This sounds simple, but a lot of companies actually don’t do much to train their employees in this area. Julie predicts that’s going to change post-Weinstein, but for now, many employees are in the dark about their company’s rules. Talk to your HR department about the corporate rules or even ask for a company-wide training. Julie says the most important thing for any workplace guideline is for employees to know how to, and feel comfortable enough to, escalate any issues they’re facing. Make sure that you and everyone in your company is educated and empowered to escalate problematic situations. As long as the dynamic you’re pursuing is allowed by your company, you’re in the clear. If it’s not, stop immediately. Do not pass go. Do not collect $200. Your company has these rules for a reason and you’re not doing anyone, including yourself, favors by ignoring them.

I loved this tip from Julie. It’s a little counter intuitive, but totally makes sense once you think about it. When you first start flirting, keep it entirely digital so you have a written record of both of your behavior. This will ensure that you’re staying well within the lines with all of your flirting. You probably don’t want your flirty notes or coy jokes documented for posterity and that’s exactly the point. If you’re writing something you wouldn’t want a future HR manager to read, then you shouldn’t be sending it. It’s that simple. Keeping a record of everything will force you to keep your flirting in the kosher area.

We obviously know that unwanted physical touching is workplace no-no. So are unwanted comments about someone’s body or appearance. How do you know if a comment is unwanted? You don’t, so just avoid mentioning someone’s physical appearance completely. Instead, talk about other things with your workplace crush. Julie suggests showing an interest in their out of work hobbies or activities. Frankly, those convos sound a lot more interesting to me than one-off comments about someone’s looks anyway!

You’ve heard me say that men need to be aggressors in romance. Go after what they want. Hunt! Pursue! Get it! But, when it comes to a workplace situation, that’s not the case at all. If you’re a man or a woman attempting to flirt it up at work, you need to focus your energy on being sensitive, not aggressive. When you make your flirting moves, keep your eyes and ears open for anything that could be interpreted as a rebuff or your flirtee not being interested. If he’s not writing back to your flirty e-mail right away or she doesn’t seem excited when you stop by her desk to chat, take the hint. The workplace is a sensitive place to start a romantic relationship and accordingly, you should be sensitive when you’re attempting it.

I know that direct communication isn’t the sexiest or most romantic of ideas, but it’s important when it comes to workplace flirting. Once the flirtation has gone on for a bit, it makes sense to check in with your flirtee and confirm that they’re cool with the situation. Make sure this is a private, quiet and sober moment between the two of you and ask, “Are you ok with what’s going on between us?” Getting affirmative consent is crucial in a work romance situation. So, don’t stress about the awkwardness and just do it. Way, way more awkward to be involved in a harassment investigation than a quick conversation!

Hope that helps everyone out there get a handle on how to flirt at work without offending or victimizing anyone. If you’re interested in learning more from Julie, and she has a ton to teach, go ahead and follow her career advice on Twitter or check out her super fun podcast about the careers of women in communications, Coffee Break with NYWICI.